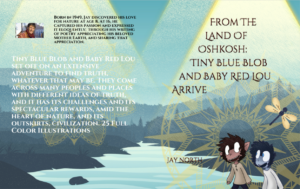 Tiny Blue Blob and Baby Red Lou set off on an extensive adventure to find truth, whatever that may be. They come across many peoples and places with different ideas of truth, and it has its challenges and its spectacular rewards, amid the heart of nature, and its outskirts, civilization. 25 Full Color Illustrations

“Two rather precocious lads- Tiny Blue Blob and Baby Red Lou, friends bonded from the time of birth, heard rumors during their young lives of fulfilling their life desires and destiny. Nothing so bold had ever been considered in the land of Oshkosh before. None of Oshkosh inhabitants ever thought of leaving their land, not one in the long history of Oshkosh had the people considered something different for their own lives.”